A time to buy?

We are now beyond the five year mark from when the market last peaked. Back then the slowdown was kicked off due to some pretty radical changes to taxation on residential property, most noticeably the sharp hikes in Stamp Duty and introduction of ATED (tax on residential owned in corporate vehicles or similar). 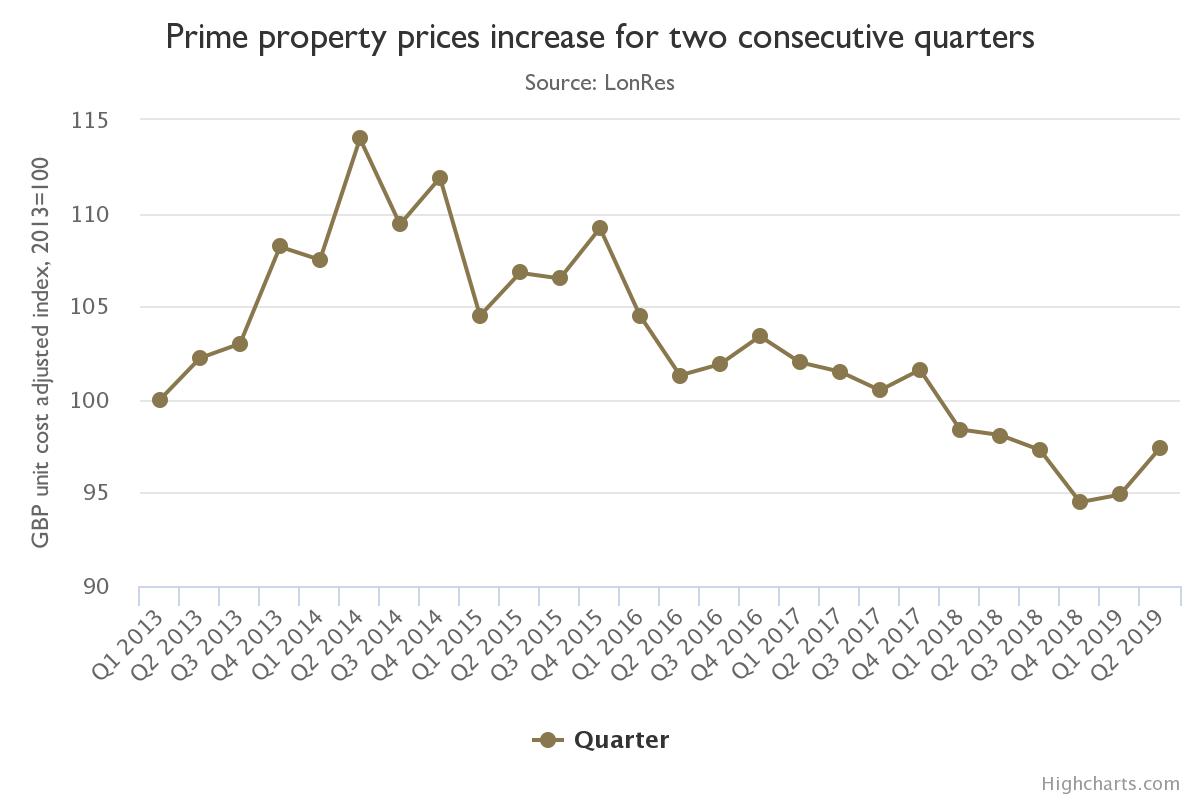 There have been encouraging signs of activity which have translated in an upward tick in value. However, it has to be said that transaction volumes remain very low. The chart above shows an average 17% fall from the Q2 high in 2014. As ever, the average hides a multitude of variances. I would however agree that, on average, prices are off close to 20%. The variances are most clearly seen if comparing a £500k flat and a £20m house, the former probably being up some 5% and the latter off by a third over the same period.

Quality and rarity remain the key and this is most noticeable in the new build sector. Discounts of 25% or so can be negotiated on bulk purchases in areas like Nine Elms, whereas 10% is probably the best one can hope to achieve in quality, prestige schemes in genuinely prime central locations.

Make no bones about it; this is a very challenged market. However, as noted above, it has weathered the storm remarkably well and is missing any hint of real distress. We remain in a very low interest rate environment and this allows sellers to play a long game, whether a developer, private investor or owner selling up. For some while now, it has been well noted that this downturn is more of a transaction crash than a price crash.

The politics of course remains very uncertain and it would be a brave, or foolish, person to predict what comes next. Yet, amidst this extraordinary circus, the economy ticks along, the broad UK housing market continues to grow (albeit at quite anaemic rates) wages are now increasing ahead of inflation, employment levels are at record highs (youth employment rates specifically put most of Europe to shame) and new investment into key sectors like Technology & Media is at world-beating levels.

As noted, the domestic housing market continues to grow, having seen uninterrupted growth since the financial crisis. It badly needs a period of stagnation, or even a correction, to allow the positive impact of wage growth to address the affordability gap. London may well export some of its pricing adjustment which may be no bad thing. Meanwhile London has seen a very real correction and it feels like we are at the point to call this a buyer’s market and take the view that the next 12 months may be the optimum timing. However, for those seeking real value one still has to find those sellers who need to sell and who do not have the luxury of time on their side. It is blatantly apparent that there is a wall of opportunistic cash looking at the London market and waiting for a sign to strike. For most the sign will be when everyone else is buying and people are talking about prices having risen. We may be a year or two away from that point but the months ahead will likely throw up the discounted jewels which offer real long term value. Meanwhile the ill-informed are likely to be seduced in to buying the cheap, polished stones if they erroneously make their judgments simply based on ‘the bigger the discount the better the deal’.

For those attracted to the prime London market and eager to take advantage of the depressed prices and battered currency, here are some thoughts:

Second-hand new build – This can be a misleading term, particularly for the market in the Far East, as we tend to look at ‘new build’ as anything built within the last 25 years. With so much stock in central London falling within conservation areas, the supply of newly constructed units is always very limited. As a result newly completed stock tends to achieve quite substantial premiums for the developers. What is often overlooked though is the initial devaluation as new become second hand, not dissimilar to buying a new car. In recent years the quality bar in the new build sector has been rising ever higher. In addition, developers have responded to buyer needs which tend to be centred around security and services. Resales tend to be quite rare. After five years or more of ownership, prices tend to drop down to a level that is more related to general pricing trends, yet the key advantages remain as attractive as they were when presented in a glossy developer’s brochure.

Pieds a terre – As stamp duty rates soared, I guessed that second home buyers may step back and look at smaller purchases instead as a London base. I think this has shown to be the case. In fact, if you look at the new build sales, the one beds tend to fly out the door (and far less so to pure investors as used to be the case). Smaller units are holding up way better than the larger properties for many obvious reasons. The wealthy still want to buy for children, have a London base and property investment remains a driver for long term wealth preservation.

The tech corridor – The classic ‘despite Brexit’ story is the TMT boom in London. While the financial sector continues to adjust to the post-crash era and Brexit nervosa, the tech sector is flying with £5.5bn new investment funding raised in the first half of this year alone (50% up on same period last year and outperforming all EU countries by a mile). A visit to the Kings Cross regeneration area implants this in your head immediately. Helped by Google’s largest HQ outside of the US (due to open soon) and expanding LinkedIn, Facebook etc the place has an energy that defies the most hard-headed doomster. The ‘tech corridor’ runs from Paddington to Shoreditch where the restaurant and bar scene is electric. It shows London for what it can and will be. No wonder the under 30s all want to live in the East.

Covent Garden/Mid-town – London’s old centre (the C in WC1, WC2 standing for central) is undergoing a significant change. Covent Garden has been established for some time as an entertainment hub but in recent years it has become one of the city’s most sought after residential locations. A clearer example of this was the impressive success of Capco’s Floral Street scheme selling out at around £2,500psf on average. The trouble is that supply is just too limited. Hence the emergence of mid-town to the east. The likes of the Rosewood hotel opened a few years back as an indicator of what was to come. Lohda’s Lincolns Square scheme by the spectacular Lincolns Inn has got off to a flyer with 90% reportedly sold, Not so far 190 Strand sold like hot cakes a few years back, both these schemes commanding prices well in to the mid-£2,000s psf as an average. This is definitely an area to watch.

Here is a selection of the projects our Obespoke team has been working on at some of our core locations:

Holland Park – We have just completed a three bedroom penthouse with wrap around terrace and greenery on all sides. Perfect for warm days and evenings….and yes we have put in aircon!

Kensington – Bought, furnished and let a one bedroom investment with a year’s rent paid up front – job done.

Notting Hill – With planning coming through, works are about to start on pretty little mews house bought in June.

South Kensington – We have completed the refurbishment, to the client’s requirements and with our investor hat advice, of a classic first floor flat bought at the end of last year.

Earls Court – External refurbishment of a block of five flats with additional works to two of the units.

We have just launched our new Obbard website to complement the Obespoke website we launched last year. You can read the full length version of this market comment on the new website. You’ll also find links to our current rental properties, details of our innovative new landlord and tenant app, case studies showcasing some of our beautiful properties and more information about all our property services.