On balance 2017 was a pretty good year. If you were able to put down your newspaper, switch off the TV and chose Classic FM over Talk Radio, you probably found the world was a relatively content place. I am of course talking primarily as an investor but also from a prime London property perspective. I believe it was the first time in history that the FTSE recorded a gain in each and every month of the year. The euro zone kicked firmly in to life ahead of expectations and some of the returns in emerging markets, particularly the more mature Far Eastern
markets, were blinding. Fortunes have been made on cryptocurrencies and no fortunes lost in Bond markets, despite many strong predictions. Meanwhile, no crash materialised in the prime London property market, to the contrary, despite a continued easing off in prices in general, the very top end appeared to show signs of a mini resurgence in transaction volume.

I should add however that I do not in any way look to close my eyes to some of the real horrors experienced, and being experienced, during the year or to belittle the very big issues of our time. 2017 was quite a grim year in this respect. Here in the UK the London & Manchester terror attacks and Grenfell Tower cast a dark shadow. Abroad the horrors from Burma to Yemen defied hopes that the world progresses as a civilisation. Meanwhile political leadership seems to be at an all time low, although with two of the world’s leading economies, the US and Germany, motoring quite nicely with barely a functioning Government in place at all, who needs politicians. The context within which the London property market found itself was a very political one, dominated by the febrile Brexit debate. The political influence stretched further with a new London mayor making grand statements on supply and affordability while coming up against the harsh realities his predecessor and all housing ministers had themselves banged up against in recent decades. Meanwhile the Government continued to make implications on market intervention as they continued to meddle with taxation, most recently in abolishing Stamp Duty for first time buyers on purchases under £500,000.

We saw the broad London market defy many grim predictions and show quite an impressive resilience given the headwinds. On average prices are expected to have softened by around 3-4%. Cluttons own statistics (below) break down the relative performances and average values in each of the PCL locations, perhaps Belgravia being the one anomaly with prices likely to be distorted by a few large deals. This contrasts with a 2.6% rise nationally (according to nationwide). The second half of the year in particular saw levels of activity in PCL which prompted a number of commentators to talk of a bottoming out or even recovery. Dry statistics may tell you one thing, but estate agents smiles are perhaps more revealing and many in the prime markets had quite a bumper final quarter in 2017. I feel talk of recovery is premature however and the road ahead remains bumpy but any lingering fears of a pricing collapse seem a long way off the mark. 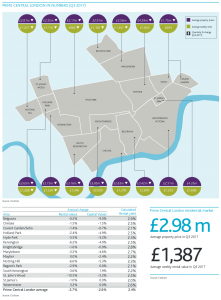 Below is a bit more detail to put some flesh on the bones when it comes to the prime London market. Many may have heard of of LonRes which has become a must have tool for property professionals in recent years. The information that we have access to via this portal is as informative as one can get and probably represent s 70-75% of all activity in the prime London markets. The following information is taken from LonRes;

These only really give a flavour. The averages disguise a multitude of detail, such as the large proportion of period conversions with no lifts or quality management in areas like Notting Hill, where some of the highest values within its best addresses are often achieved, to the extremely limited availability of residential in the likes of St James’s where the number of transactions are just a handful.

Looking ahead the appetite for super prime projects appears to continue with more new schemes being launched. Most recently Clivedale announced a tie up with Mandarin Oriental offering 80 fully serviced residences at prices starting just shy of £5,000psf (or £1.95m for a 400 sq ft studio). Initial response to the launch already looking positive.

What lies ahead?
Only fools make predictions? Barring any major political developments, 2018 will likely be very similar to 2017. Prices will remain much the same, however we may well see further softening in certain sectors. Luxury new build in secondary locations will continue to be effected, particularly as a result of reduced overseas demand and lesser appetite for buy-to-let .Buyers are now taking their time to make decisions and becoming more informed, the compromised properties, which it has to be said makes up a greater number of central London stock (old buildings with no lifts etc.), will suffer by simply failing to sell or having to see prices adjust more significantly. There will be a continued flight to quality and, as has been proven again and again, true
quality (put simply the really good properties) will hold firm and still attract good levels of buyers. Affordability remains key for the domestic market and the lower pricing brackets likely to fair best where pricing reflects reality. Stamp duty will continue to depress transaction volumes, particularly in the family home market (values circa £3-6m). The super prime will continue to gain traction as the acceptance of very high Stamp Duty rates starts to take hold against a perception that prices have softened enough to offset this and a recognition that taxation on residential property is a global trend. We expect the top end rental market to continue to prosper as a sizeable number of would be buyers, as seen in 2017, look at rental as an interim option while the political uncertainty lingers. London’s unique global appeal will continue despite the Brexit vote removing a bit of the shine.

Investment returns in London in the near term will be muted at best, although the city’s fundamental supply/demand imbalance has no end in sight. There is little reason to believe prices will rise over the next couple of years, although upward pressure on rents is apparent. Yields are very thin and changes to taxation have eaten in to income returns. As a store of wealth, property retains its appeal and in an uncertain world, London continues to offer an inviting degree of safety and stability with its historical appeal from education to entertainment in a genuinely diverse, multi-cultural city remaining undimmed.

Residential property will continue to offer the strong ‘emotional dividend’ which plays such a large part in property ownership and is, in my view, a strong driver behind many buyer’s decisions to invest in this city.

Obespoke our design and build arm www.obespoke.co.uk was launched on 1st November 2017. Essentially this is a re-branding of the side of our business which has played, and continues to play, such a key part in adding value to our client’s investments and homes. The following are just a few examples of projects completed at the end of 2017;

CHELSEA, SW3
Upgrade (new bathrooms, decoration, flooring) of a tenanted flat off Sloane Square which was managed around the tenant’s occupancy so that the landlord received full rent during the works and a new 5 year commitment from the tenant.

KENSINGTON, W8
A flat near Hyde Park having been achieving £760pw. Was completely remodelled at a cost of circa £180,000 and re-let within a week of marketing at asking rent of £1,350pw.

KNIGHTSBRIDGE, SW7
Development of a 2,600 sq ft house which achieved the highest price psf on a house sale in Knightsbridge between £5m to £10m in 2017.

ST JAMES’S, SW1
A phased refurbishment of 6 flats in one building. Upon completion we saw rents uplifted between 35% to 50%.

BAYSWATER, W2
A flat that had been on the market for sale at £1.695m for approx.. 8 months. Obespoke spent 3 weeks and the client circa £25k to give it a makeover. Went under offer within first week of relaunch at £1.65m.

St JOHNS WOOD, NW8
A flat that had been on the market for a year at an overly ambitious asking price. Eventually reduced to £2.25m but still not selling. Obespoke spent a week setting up with show furniture and accessories. Sale agreed and concluded at £2.2m.

KNIGHTSBRIDGE, SW7
A £6m house bought for clients back in 2010. Clients went away for 3 weeks and a program of improvements were completed in their absence, including complete redecoration.

Our current project list for 2018 varies from completing a £55m single house started last year through to a £4m block of 7 flats being acquired. We do it professionally, we do it well and we do it with people you trust and like to deal with!

Wishing all our clients the very best for 2018.